It’s something I’m often asked by curious anglers and prospective clients as everyone tries to time up the run perfectly.  Some swear by studying Lake Erie water temperatures, photoperiod shortening, rainfall counts, and a variety of other scientific means to pinpoint when the fish will be in the streams and make a trip to Erie worth it.  Is it all snake oil, or data that should be utilized by those attempting to time the run?

The strain of steelhead in Pennsylvania is a fall-running variety that sticks around through spring and their spawning season.

Steelhead begin running and entering the tributaries as soon as Labor Day, but the peak doesn't come until after Thanksgiving. When the spring fish leave the streams (usually sometime in April) in favor of the icy depths of Lake Erie is of far less angler interest than when they enter in fall.

As a steelhead guide, there are a few key factors I look for when trying to schedule a trip to fish the steelhead run.

Most of the time the Lake Erie tributaries are helplessly low and clear.  That makes for challenging conditions going after the fish in the streams, but it also means fewer fresh fish enter from the Lake.  Rain events triggering the upstream migration are incredibly important to the start, and continuation, of the steelhead run. Without precipitation to swell water levels and provide fish the ability and security to venture inland, the run would never go off!

This might not be as much a factor in the actual run as just circumstance for the time of year, but falling temperatures coincide with fish entering from the Lake.  While the first Erie steelhead start to show up after Labor Day, the “peak” times don’t normally occur until Thanksgiving or Christmas. Steelhead, like other trout species, prefer cooler water and the passing of fall into winter encourages more upstream migration of the run.

Most of the fish activity, at least in terms of running upstream, occurs at night.  The cover of darkness provides security they need to move through shallower areas when they would otherwise be quite exposed.  These fish are big, and in the low water conditions that are so often present, they would stick out trying to traverse sections of stream that are only inches deep.  That problem is somewhat alleviated during nighttime hours!

What it all adds up to is a run that gets going sometime in October, but doesn’t get really good until November.  That can change from year to year based on weather systems and temperatures, but it’s relatively consistent. Checking in with a local guide service, like Wildwood Outfitters, can be a great way to stay plugged in.

Otherwise keeping an eye out for shorter days, more rain events, and dropping temperatures, anglers can successfully time up the steelhead run from their computer and fairly accurately determine when the fish will start their migration!

When the leaves start to tint with orange and yellow and the breeze turns crisp, anglers become obsessed with the pursuit of steelhead.

In Pennsylvania, the steelhead run peaks around Thanksgiving, and in Ohio it’s even later, coming after the New Year’s holiday.  The first signs of these fish come much sooner, however! These behemoths from the depths of the Great Lakes start to show themselves in late September, and for many the urge to go after these fish is unbearable.  Unfortunately, anglers that target steelhead in these early months often end up disappointed and frustrated!

One of the most challenging aspects of early season steelheading is the water conditions.  Streams are often extremely low and clear throughout September and October. This makes the fish easy to spot, but incredibly wary.  A key to finding success in this early season is to go early. Experienced steelheaders will find that most of their success comes in the pre-dawn light when the fish briefly let their guard down.

Another difficult part of early season steelheading is the number of fish in the tributaries. With each rain, more and more fish enter the waterways.  The trouble is that in September and October there might only be one or two rain events that will bring in a run. This results in few fish being in the streams, and those that are in will be located in the lower portions of the drainages close to the lake.  That means anglers have to walk to find fish, and when they do find a pod, anchor down and work it hard. Early season fish are often few and far between, so make those shots count when you find them!

This is tough to do because the fish are so big!  Early season steelhead are full of spunk and vigor, noted by their powerful runs and acrobatic attempts to throw the hook.  While anglers will want to use stiff leader and tippet in the 1X and 2X variety, the low and clear conditions call for something much lighter. Fluorocarbon leader and tippet in 3X and 4X will result in more hookups in this early season even if it means a few break-offs!

Getting out in pursuit of steelhead early is one of fly fishing’s greatest pleasures.  Having the chance to catch these amazing specimens while wearing only a t-shirt is a unique and memorable experience.  Keep these tips in mind to ensure that the early season season outing is full of fun and smiling pictures holding bright chromers fresh from the lake! 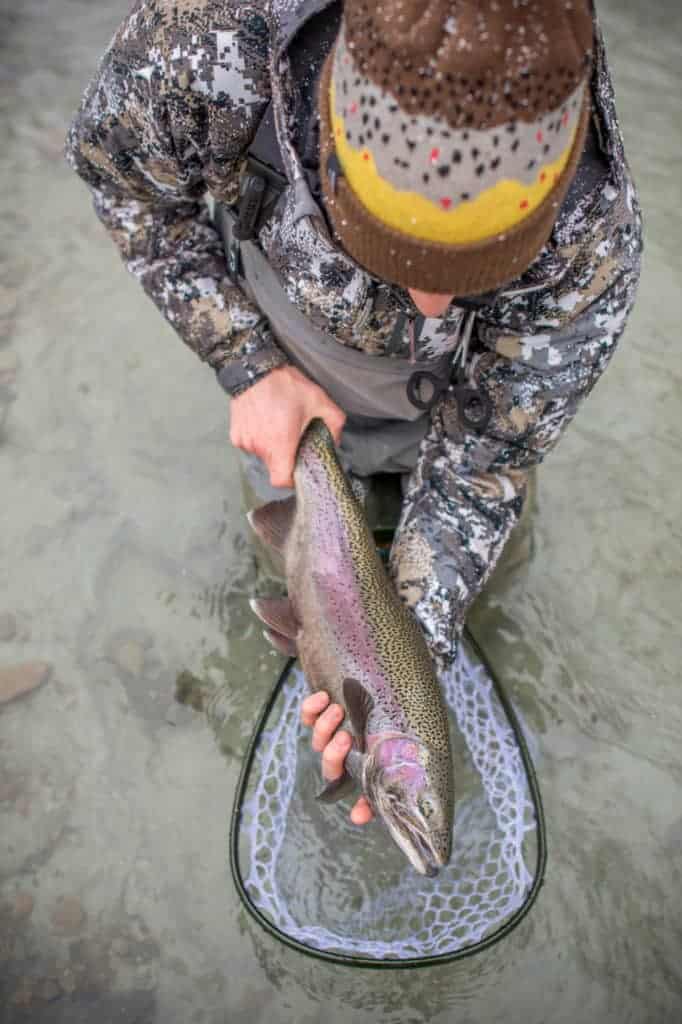