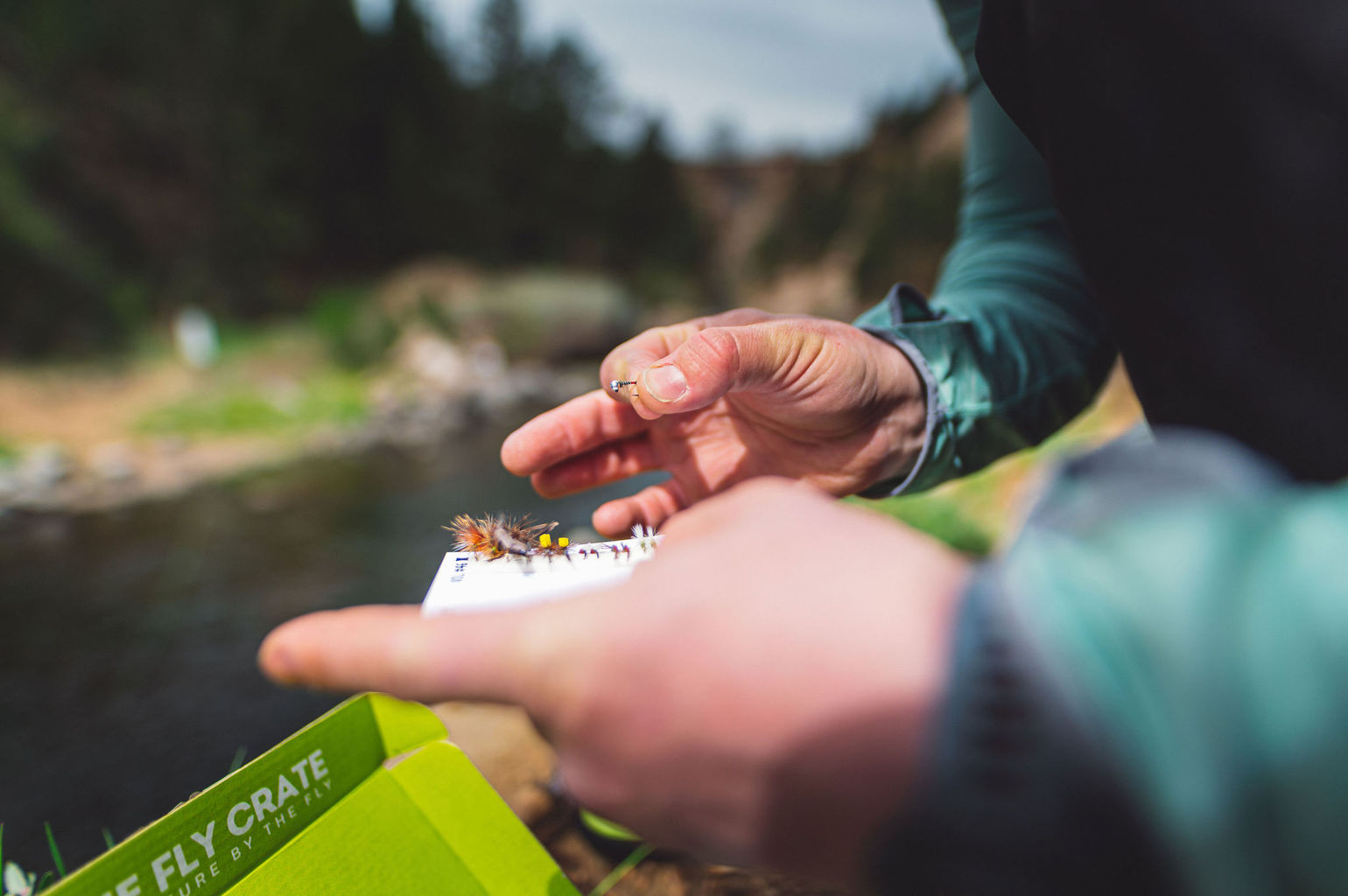 Many anglers take to YouTube or go on a guided trip to learn new techniques, and much of that is centered around fishing two flies.

It might be simplistic to say, “two flies are better than one,” but the fact is many times it’s true!  Having multiple patterns out there increases the odds of hooking a trout for a variety of reasons, whether that be imitating two different insects or using different life cycles of a bug that might be hatching.  The problem with fishing two flies is that if done incorrectly, you’re doing more harm than good and the end result can be tangled messes and far fewer landed fish. The keys to fishing this way efficiently involve understanding what type of rig you’re going for, the water you’re fishing, and how to specifically rig the setup!

One of the most popular spring/summer setups is a dry-dropper, meaning there is one dry fly and one subsurface fly on the rig.  This is a phenomenal way to utilize two flies and a ton of trout fall victim to anglers who know how to properly fish this way.  It all starts with selecting the dry and the dropper, which is critical to the efficiency of this technique.  The dry fly has to be large enough, or buoyant enough, to float with the weight of the nymph underneath.  That means you probably won’t want to use a #18 Adams with a #10 weighted stonefly below.  Typically speaking, larger dries like Parachute Hoppers or Chubby Chernobyls are perfect selections for the dry fly as they are capable of staying afloat with a nymph trailing behind.  In terms of nymphs, this can largely depend on what exactly you’re trying to imitate.  Attractor nymphs like a Prince or CDC Pheasant Tail are always good choices, but you can also go more technical by hatching a specific hatch like a Grannom Caddis nymph or baetis.

Most anglers are aware that trout feed subsurface a vast majority of the time, so it only makes sense to try using two nymphs at once.  When using an indicator, the classic setup is having the heavier nymph in front (also called the point fly) and a smaller nymph trailing behind.  Looking at specific patterns, a stonefly out front is heavy and will get the rig down with less split shot, and then a smaller, lighter fly like a mayfly nymph or midge as the trailer is a good place to start.  The selection of the second fly is largely dependent on bugs that might be hatching at that time.   For example, during a heavy caddis hatch anglers should consider going the route of a caddis larvae, but if it’s mid-winter and midges are the way to go a zebra midge will produce fish. Another fly all trout anglers should be aware of is a squirmy worm, because when tied as the second fly on the two nymph rig it will move and play in the water in such a way that drives fish wild!

Having two dry flies is another way to fish two flies at one time. For example, you can target the day’s caddis hatches and mayfly hatches by using one of each. This is a great way to dial into what trout are keying in on and figure out what they are feeding on. If you have never fished two dry flies at the same time, there are many benefits.

When fishing dry flies it can be a challenge to spot your imitation amongst the naturals or even just within the bubbles or glare, but with two flies marking the general location, you can have a better idea of when to set the hook. Plus, when you find something the trout are biting on you can double up on the hatch with two of the same flies.

Specific setup for either of the above rigs largely depends on the type of water being fished. Smaller pocket water might not allow for several feet of tippet between flies, but deeper pools might mean you have three or four feet of tippet between the dry and dropper.  Each situation is different, so keeping tabs on the depth of water is important to know how to adjust through the day.  An easy way to determine whether or not the distance between flies is correct is to pay attention to how often your flies get hung up.  If the dropper snags on rocks every cast, odds are you need to shorten the tippet between the dry and dropper.  The spacing between flies is less variable when it comes to two nymphs.  Most times the distance between the point fly and trailing fly is somewhere between 12 and 15 inches. The spacing difference here is mostly centered around where the indicator is set.

Using two flies at a time might not guarantee a day full of double hookups, but it can increase your odds of success greatly!  The opportunity to hit on multiple bugs or key on different life stages of those bugs can be a wonderful tool for fly anglers.  Whether it be a dry-dropper or two nymphs, giving yourself that extra chance to key in on what the trout are feeding on is a huge help.  Once you get the hang of the rigging and know how to utilize different setups for varying water conditions, the results will speak for themselves and make you a true believer that two flies are, in fact, better than one! 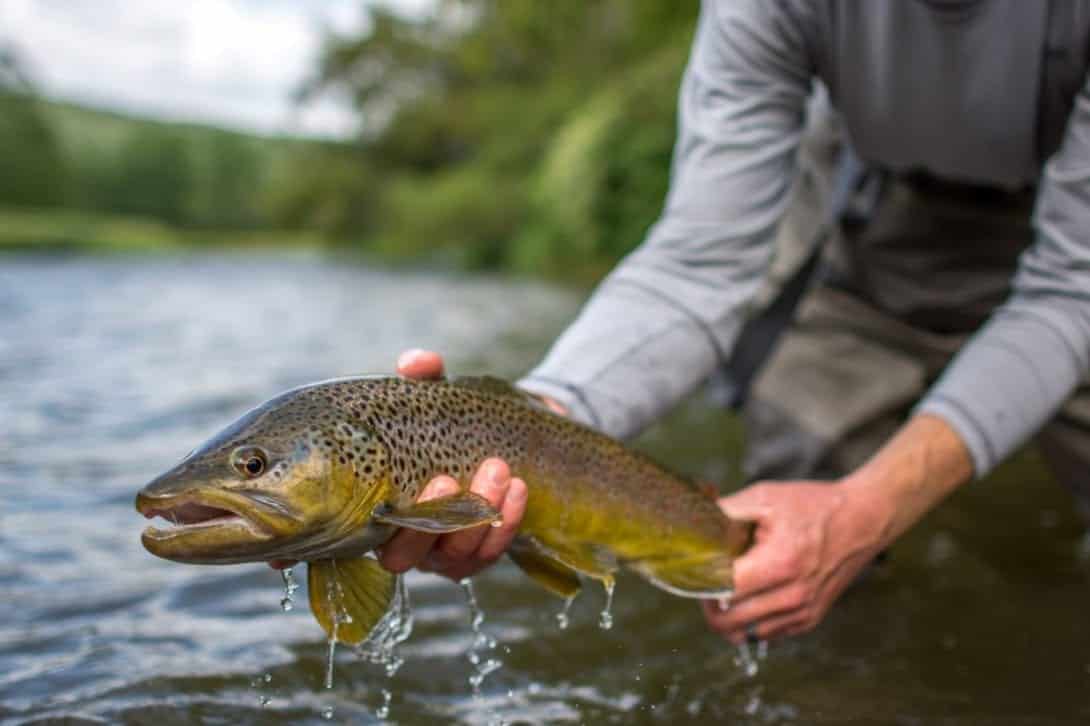 I myself have been completely guilty of mishandling fish, on more than one occasion in fact. I resembled a fly... Read More 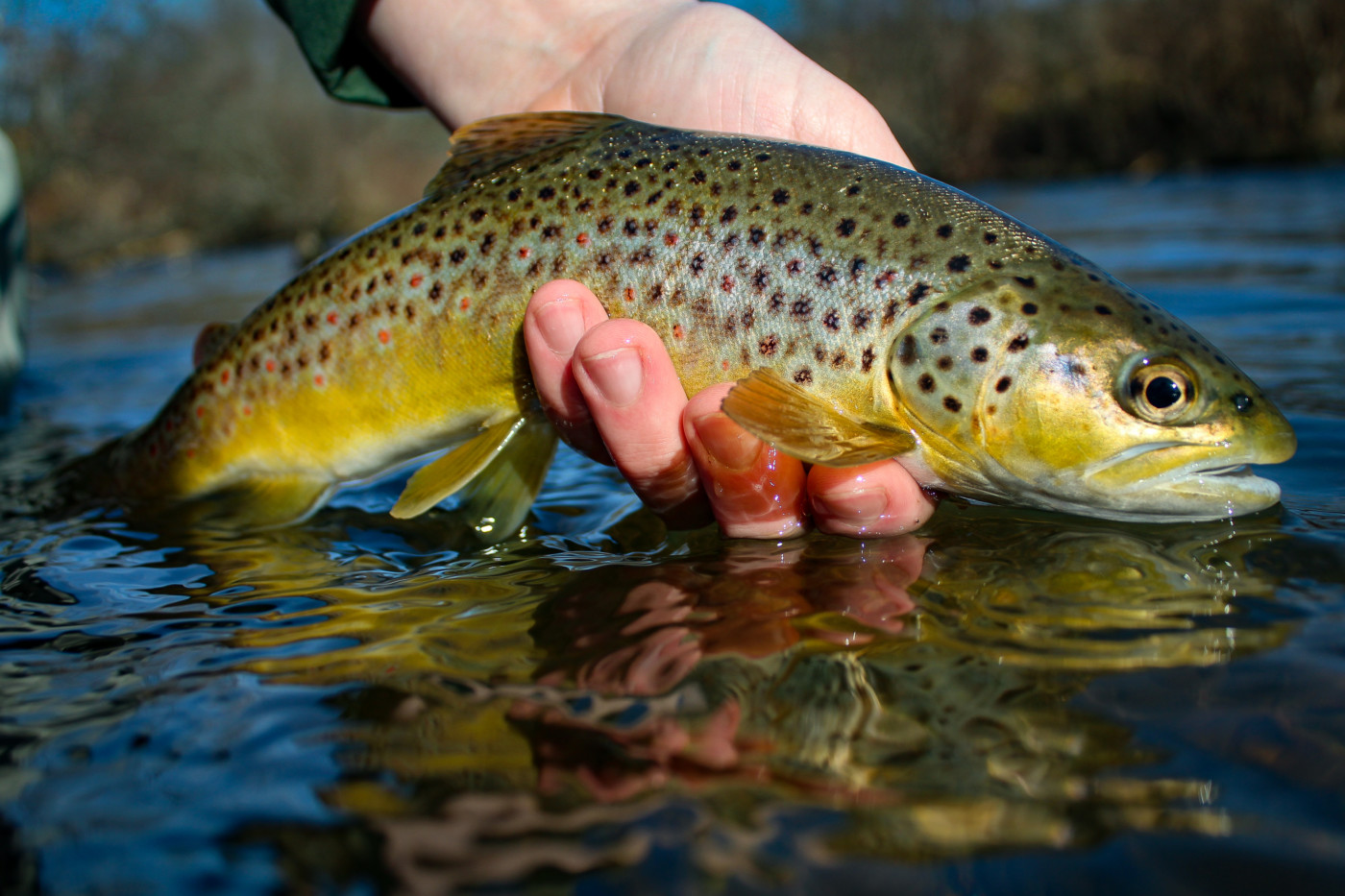 After months of staring at tiny midges and praying for warmer weather, anglers are ready for winter to break.  At first,... Read More 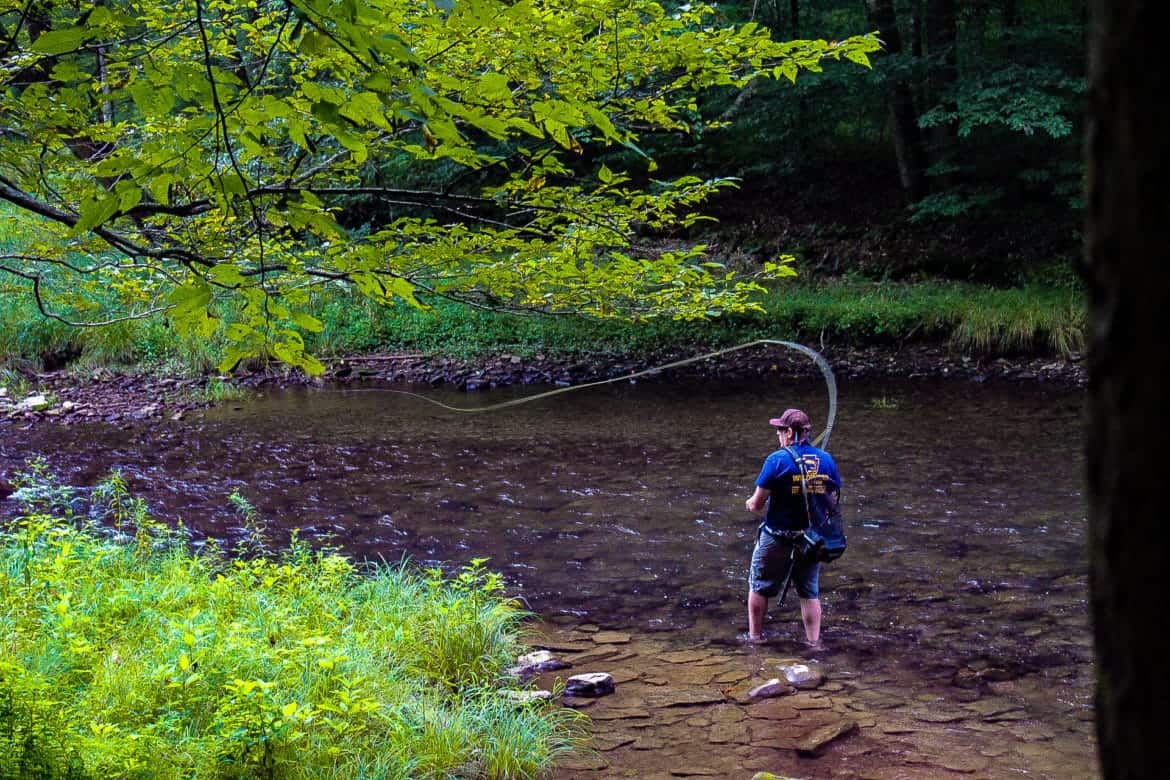 A nice brown trout gently slides out from an undercut bank to sip the ant that had just fallen into... Read More 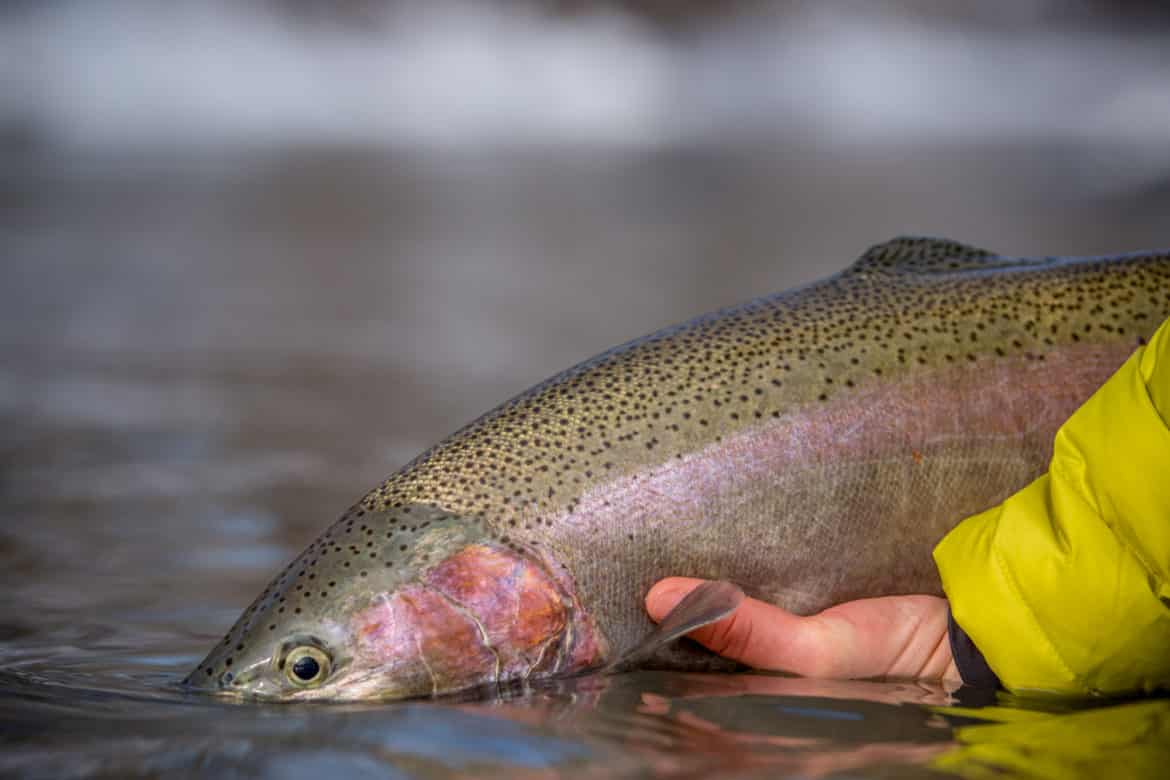 Considering how cold the Lake Erie tributaries can get, “fever” is an interesting word to use to describe steelhead fishing.... Read More 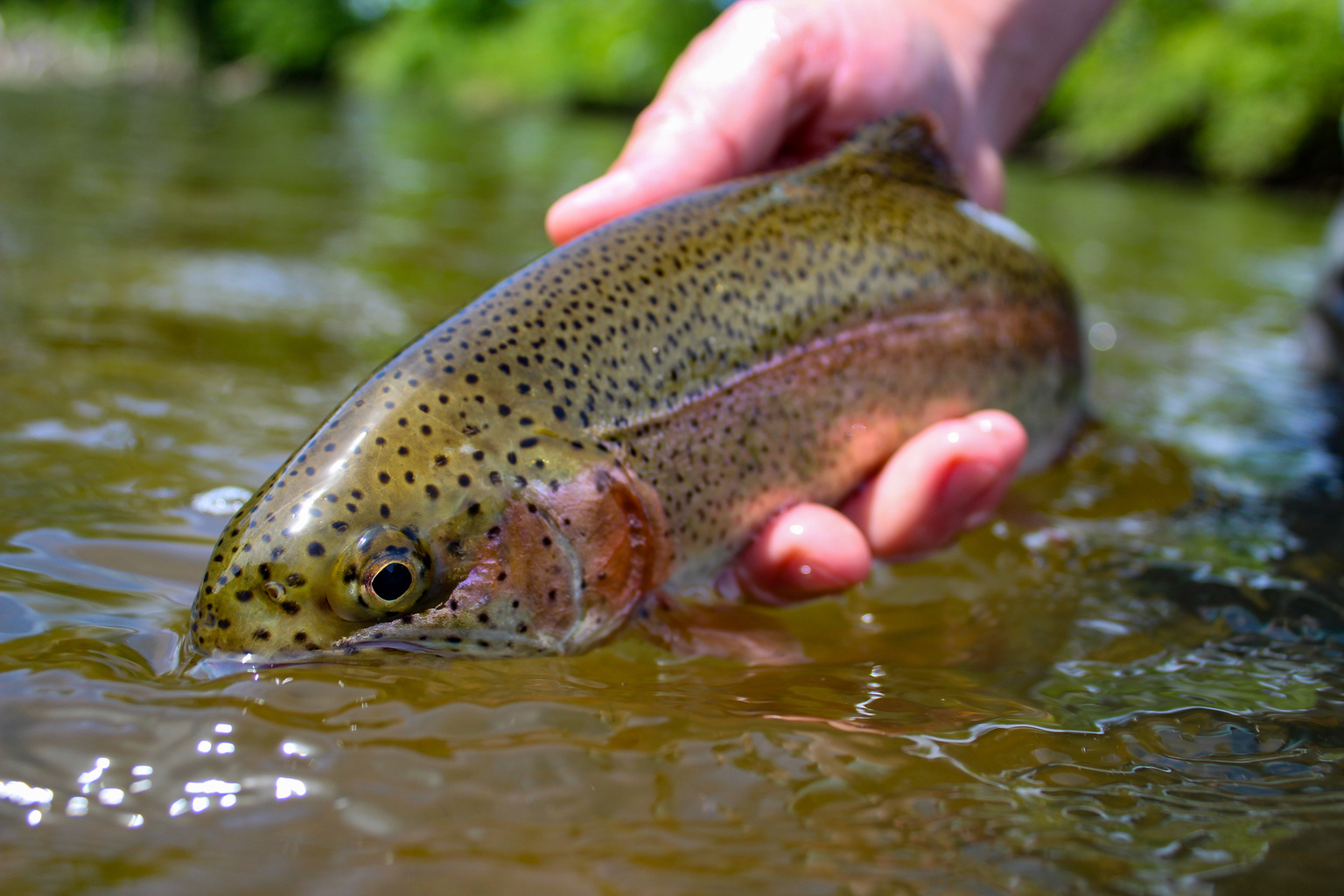 June is perhaps the best month for trout fishing in the Eastern chunk of the United States, and that’s mostly... Read More 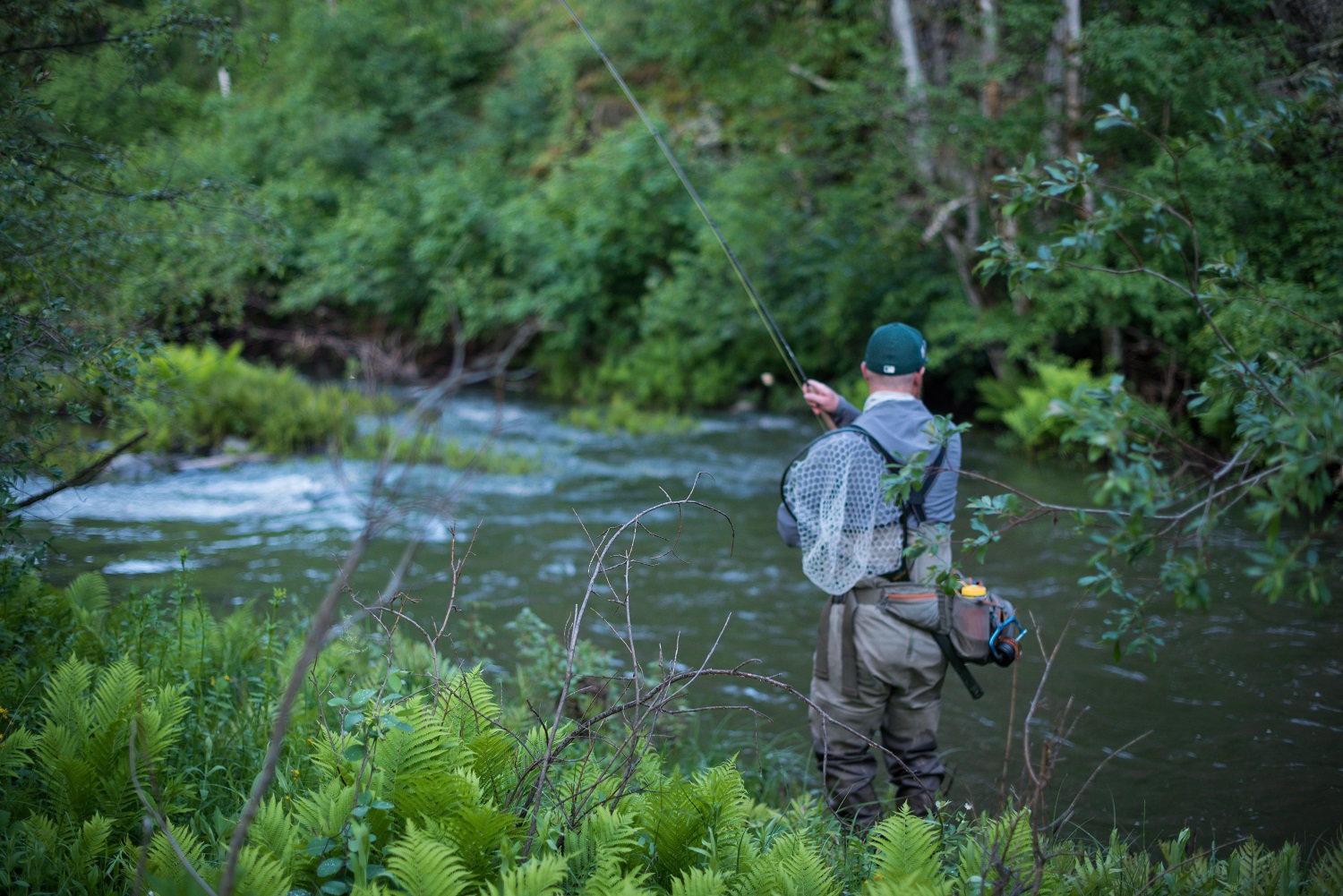 Spring is one of the best times of the year to fly fish. In an effort to prepare you for... Read More 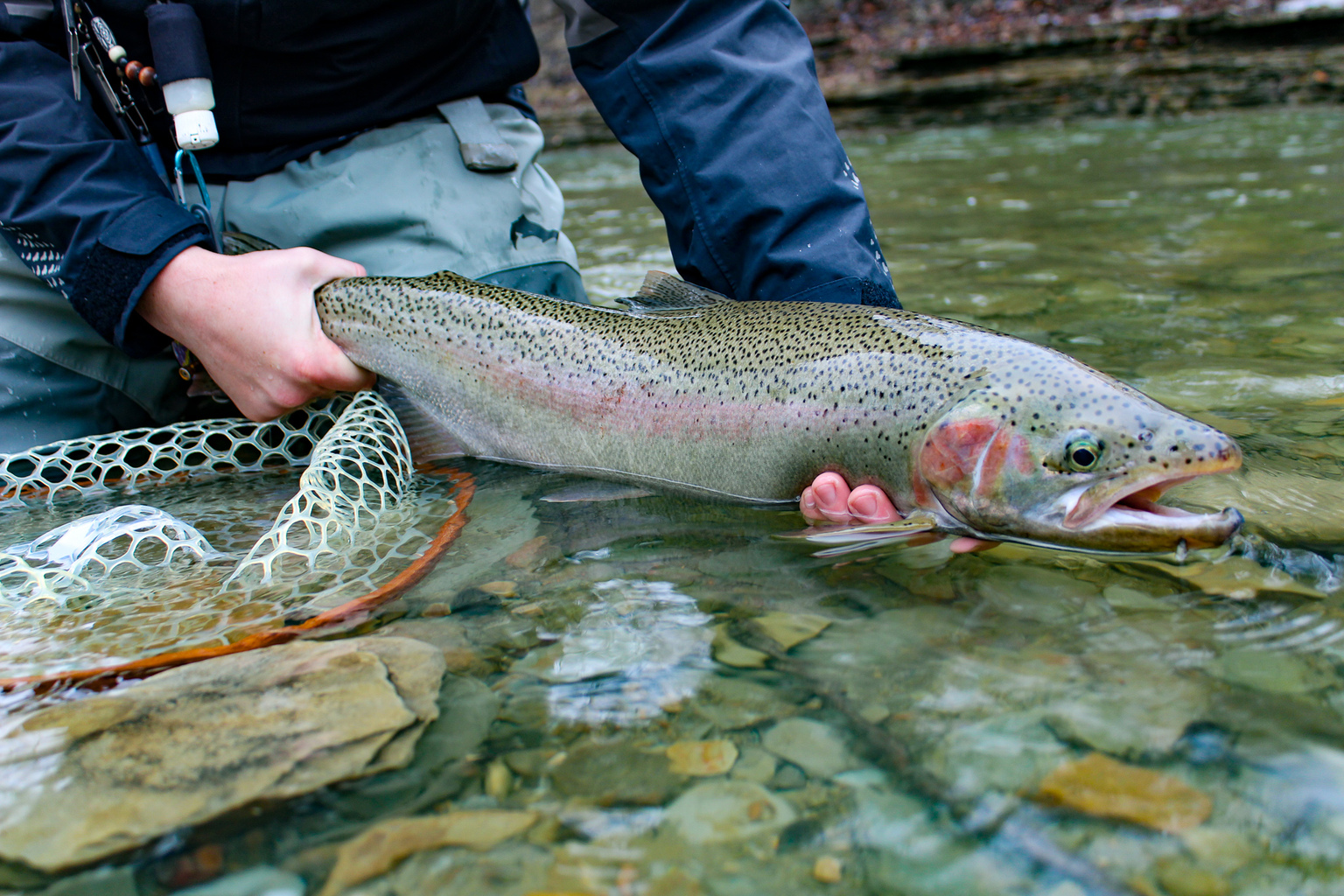 Steelhead season is fully upon us, and with each new rain and the shortening of days, the action is just... Read More 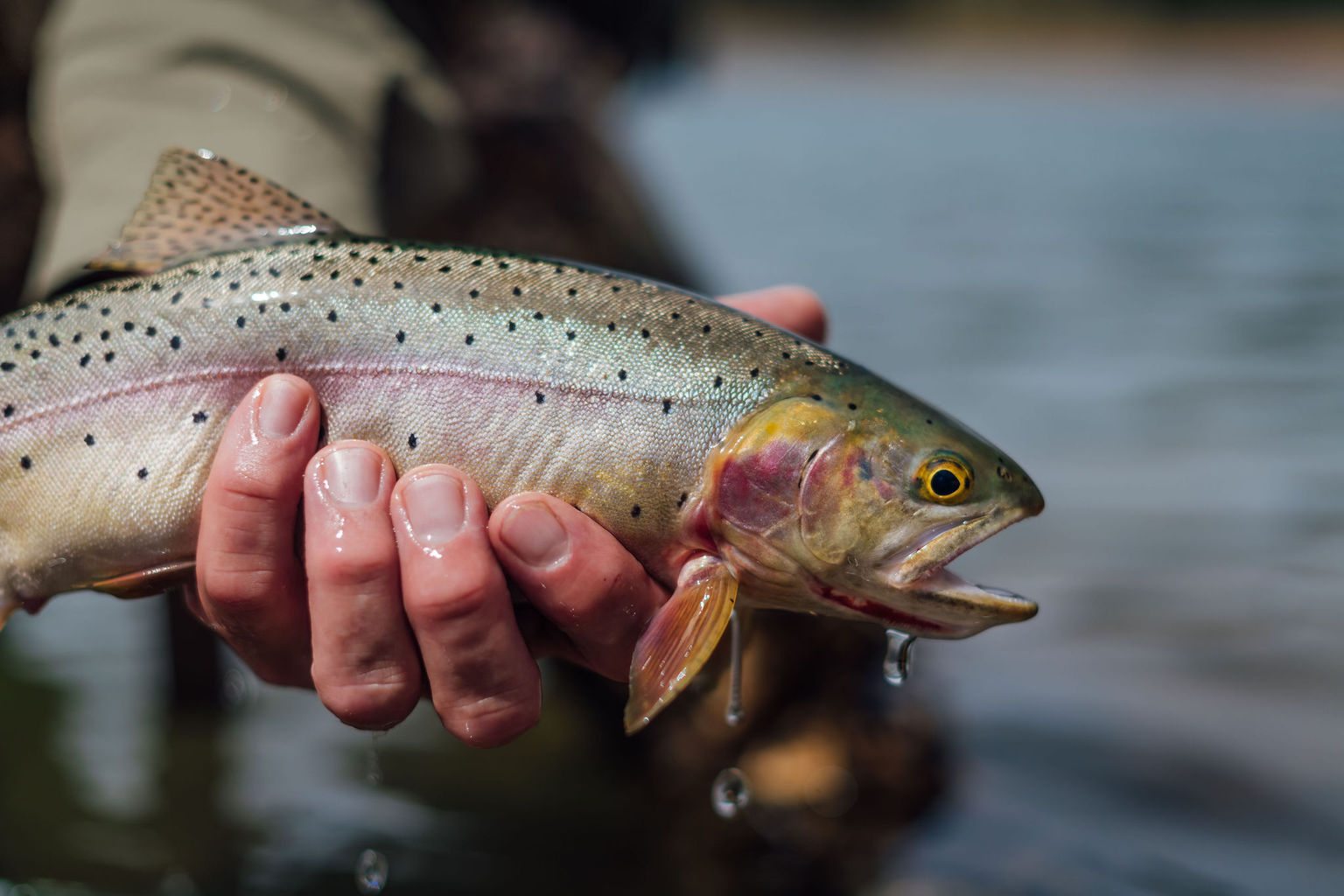 July 2, 2020 | Nick DelVecchio | Comments Off on 4 Tactics to Catch More Trout This Summer 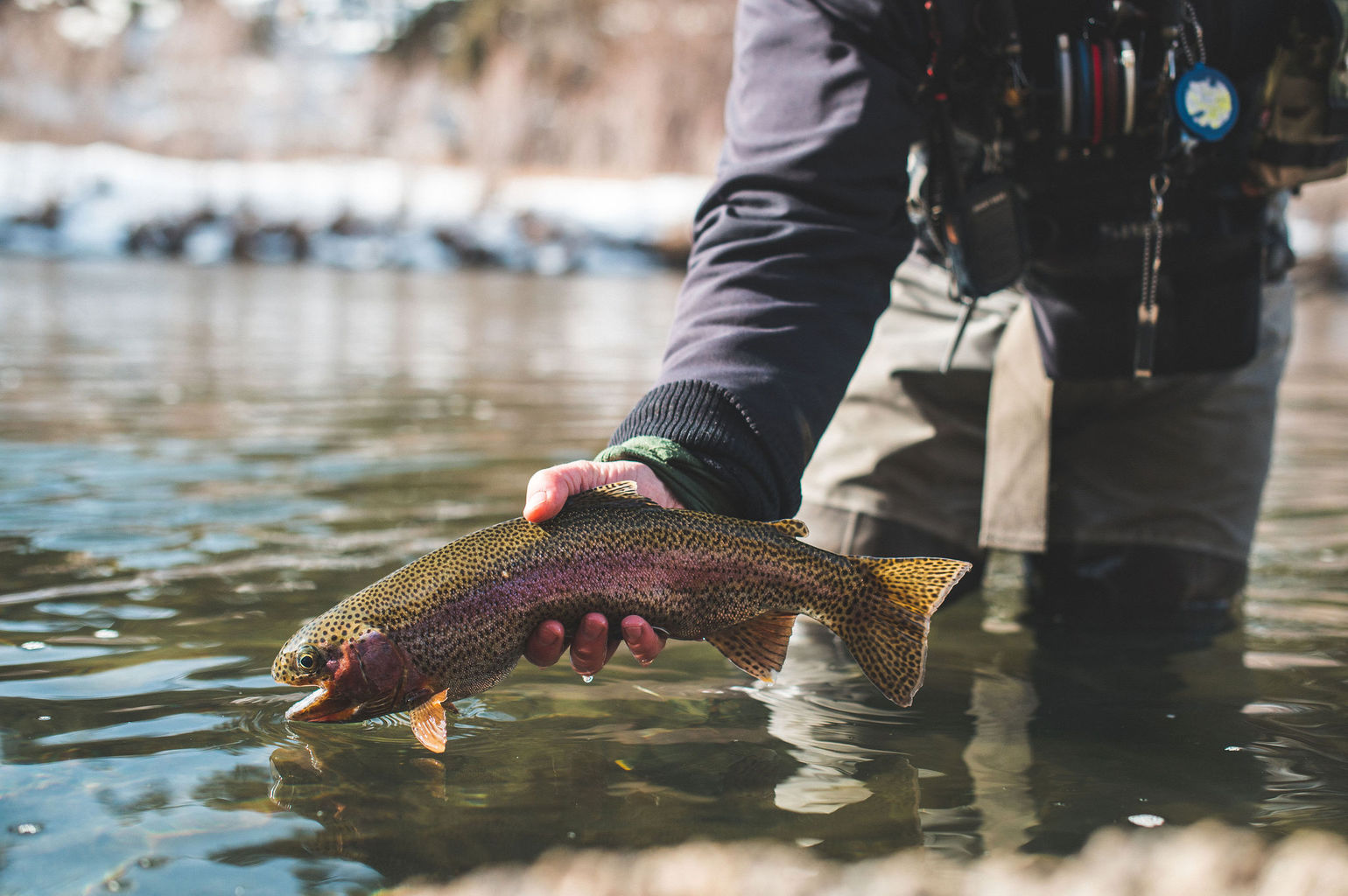 Nymphing Flies to Trout in the Spring

July 1, 2022 | Nathaniel Treichler | Comments Off on Nymphing Flies to Trout in the Spring

Table Of Contents Where to fish in murky water.What nymphs should I use?How should I rig my flies?How to fish fast... Read More 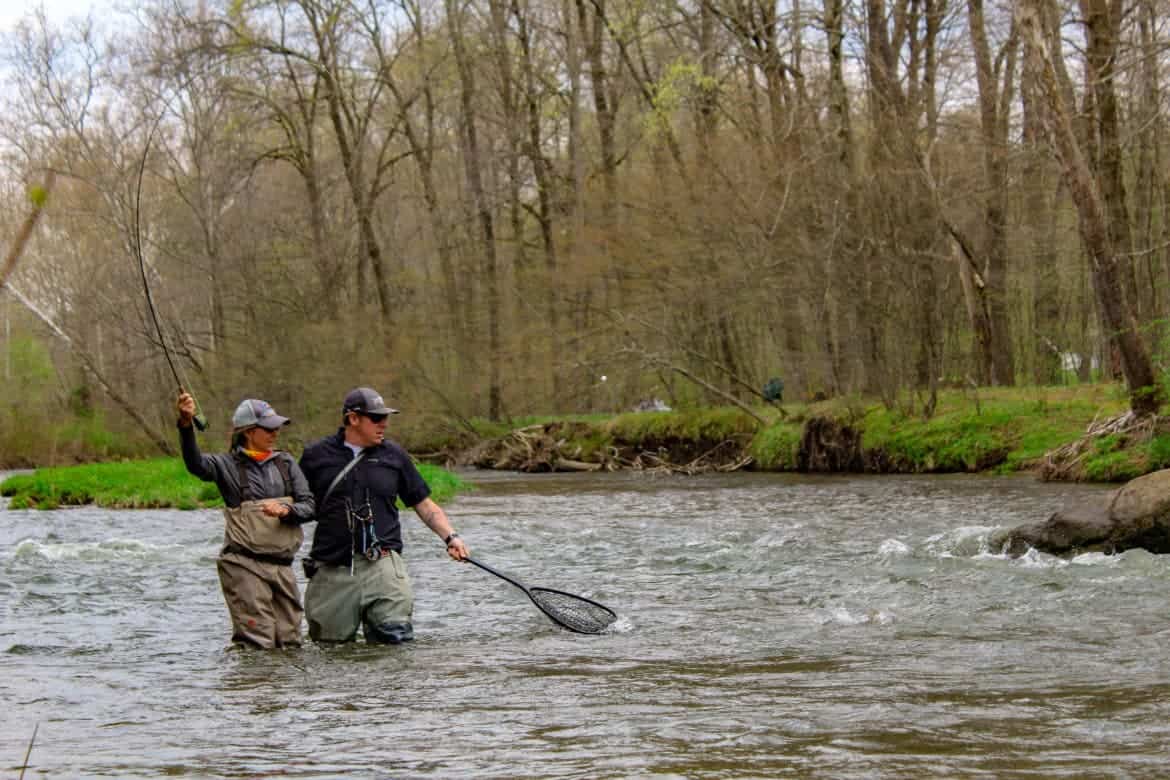